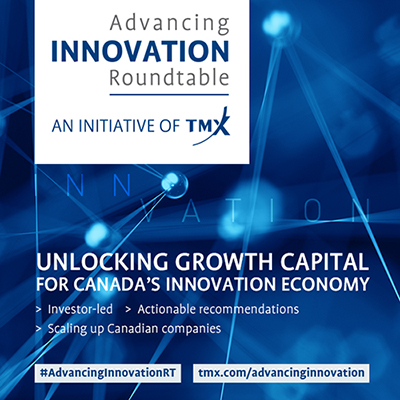 TORONTO, Oct. 4, 2016 - The TMX has announced that OPTrust CEO Hugh O’Reilly has been appointed to their Advancing Innovation Roundtable. The roundtable will include senior leaders from the Canadian investment community, including of leading experts from capital providers including pension plans, banks, private equity funds and venture capital firms. The independent working group will examine ways to increase access to growth capital for companies in Canada’s innovation economy with a focus on technology, clean tech, life sciences and advanced manufacturing sectors.

"The TMX is known for their leadership role in inspiring transformation and driving change within the Canadian economy. I look forward to collaborating with other industry leaders to explore strategies that will assist the advancement and growth of Canadian technology firms.

We have a real opportunity here to help accelerate the economic growth of entrepreneurs during their critical growth phase. Ensuring the success of Canadian tech firms is a priority for us and will benefit the Canadian economy” O'Reilly said.

The TMX has indicated that it will be hosting forthcoming meetings in Montreal and Vancouver over the next few months. The Roundtable will deliver its findings and recommendations regarding measures for stakeholders, governments and Canada's capital community in order for Canada's innovation economy companies achieve success.

For further information and other members of the committee please visit TMX website:
http://www.tmx.com/newsroom/press-releases?id=496⟨=en

With assets of $18.4 billion, OPTrust invests and manages one of Canada’s largest pension funds and administers the OPSEU Pension Plan, a defined benefit plan with almost 87,000 members and retirees. OPTrust was established to give plan members and the Government of Ontario an equal voice in the administration of the Plan and the investment of its assets, through joint trusteeship. OPTrust is governed by a 10-member Board of Trustees, five of whom are appointed by OPSEU and five by the Government of Ontario.