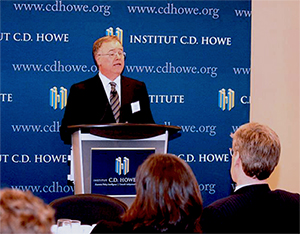 Hugh O’Reilly, President and CEO of OPTrust was the keynote speaker at the CD Howe Institute Roundtable on March 9, 2015.  Mr. O’Reilly’s speech titled Pensions as Problem Solvers: The Future of Retirement in Ontario outlined the organization’s position on the Ontario Retirement Pension Plan. It also explained how public sector pension plans such as OPTrust can support the province as it moves to redefine the retirement income system.

CD Howe Institute roundtable sessions are off-the-record events which encourage business leaders, policy makers and scholars to have frank discussions about though-provoking issues. OPTrust is posting Mr. O’Reilly’s remarks with the permission of the organizers.