Richard Nesbitt appointed to the OPTrust Board

October 2, 2019 – Richard Nesbitt was appointed to the OPTrust Board of Trustees in September 2019 by the Government of Ontario. 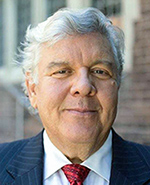 Mr. Nesbitt has more than 30 years experience in financial services and most recently served as President and CEO of the Global Risk Institute (retired). He was the Chief Operating Officer with CIBC, retiring in September 2014 after a 20-year career in securities, including CIBC Wood Gundy. From 2004 to 2008, Mr. Nesbitt was the Chief Executive Officer of the Toronto Stock Exchange Group.

With net assets of almost $20 billion, OPTrust invests and manages one of Canada's largest pension funds and administers the OPSEU Pension Plan, a defined benefit plan with almost 95,000 members and retirees. OPTrust was established to give plan members and the Government of Ontario an equal voice in the administration of the Plan and the investment of its assets through joint trusteeship. OPTrust is governed by a 10-member Board of Trustees, five of whom are appointed by OPSEU and five by the Government of Ontario.