TORONTO, November 22, 2017 – Canadian public pension funds and pension plans are regarded as among the best in the world, but they underwent an evolution of changes to get to where they are today.  Because of their success, the World Bank Group partnered with four Canadian pension funds, Alberta Investment Management Corporation (AIMCo), Caisse de dépôt et placement du Québec (CDPQ), Healthcare of Ontario Pension Plan (HOOPP), and OPTrust, as well as the Government of Ontario on a report that studies the evolution of these plans. 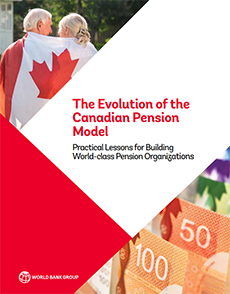 The World Bank Group will use the report, authored by Toronto-based firm Common Wealth, to inform its work to strengthen retirement security in emerging economies and increase dialogue on successful pension models in Canada.

World Bank CFO Joaquim Levy attended the launch of the report “The Evolution of the Canadian Pension Model” today at The Omni King Edward Hotel.  Hosted by the Canadian Club Toronto, a panel discussion showcased the evolution and endeavours of the pension funds and offered lessons for emerging economies seeking to improve their retirement systems and public pension institutions.

Based on in-depth interviews with some of Canada’s top pension leaders and case studies of four funds (AIMCo, CDPQ, HOOPP, and OPTrust), the detailed World Bank report covers the essential components of pension plan organizations – governance, people and organization, investments, administration, plan design and funding, and regulation and public policy – and presents a four-phase framework for the evolution of pension organizations. It outlines 14 key lessons and draws out several success factors including:

The report also highlights seven challenges that will shape the future of the Canadian pension model.

Remarks were given by:

World Bank Group – Managing Director and Chief Financial Officer, Joaquim Levy
“The responsibilities in designing and managing pension funds are immense and long-lasting. Learning from successful experiences is thus extremely valuable for those setting up new systems, as we see in many developing countries that the World Bank is working with. In designing its system, Canada has tackled many of these crucial issues. I am pleased that some of the Canadian funds are among those looking to partner with pension funds in developing countries and help them invest their assets efficiently, productively, and for the long term.”

AIMCo – CEO, Kevin Uebelein
“AIMCo is pleased that the World Bank is acknowledging the important advantages the Canadian Model of investment management offers pension plans in its latest research, and that it has chosen to include AIMCo among the leaders in this space. Canadian pension plans, as evidenced by those represented in this paper, offer several unique advantages to meet the long-term objectives of clients. The progress these plans have made in the last 10 years is remarkable, and AIMCo looks forward to continuing the important role we play in ensuring the long-term sustainability of our clients’ investments.”

CDPQ – Executive Vice-President, Legal Affairs and Secretariat, Kim Thomassin
“The report helpfully documents and explains the stages in the evolution of Canadian pension fund investors who, despite their differences, all fit within the Canadian pension model. The narrative resonates with particular saliency for CDPQ, where the evolution continues to this day with our innovative model for infrastructure investments and our expansion into emerging markets.”

HOOPP – President and CEO, Jim Keohane
“HOOPP is honoured to be recognized by the World Bank for our role in the evolution of the Canadian Pension Model. We are strong proponents of the importance of independent governance, scale and in-house investing as well as a balance of risk management, investment success and low administrative costs. This allows us to deliver 80 cents of every pension dollar from investments while achieving a 122% fully funded status that ensures HOOPP delivers on its pension promise.”

OPTrust – President and CEO, Hugh O’Reilly
“The Canadian pension model has much to offer the ongoing international discussion on pension funding, governance and management. As good pension citizens, OPTrust is pleased to be recognized by the World Bank and to be part of this effort to enhance retirement income security for all.”

Common Wealth – Founding Partners, Alex Mazer and Jonathan Weisstub
“Our collaboration on this World Bank report aligns with our mission to expand access to high-quality retirement security. We believe that making the principles and lessons from the best Canadian pension organizations available to stakeholders around the world will have a material impact on retirement security across continents.”

ABOUT THE WORLD BANK

Founded in 2015, Common Wealth is a Toronto-based firm focused on expanding access to retirement security. It has advised pension organizations with collective assets exceeding $800 billion, as well as unions, associations, and governments, on issues of strategy, governance, regulation, and the design and implementation of retirement plans, products, and institutions. In partnership with the Service Employees International Union, Common Wealth recently created the first retirement plan in Canada for lower- and moderate-income earners. The firm is currently working with a variety of partners to create portable, value-for-money, community-based retirement plans within sectors where most workers lack pension coverage.

Alberta Investment Management Corporation (AIMCo) is one of Canada’s largest and most diversified institutional investment fund managers. The Corporation manages more than $95.7 billion for Alberta pensions, endowments and government funds and is governed by an experienced Board of Directors. AIMCo’s goal is to inspire the confidence of Albertans by achieving superior risk-adjusted investment returns. The Corporation was established as a Crown corporation on January 1, 2008. The sole shareholder is the Province of Alberta. Our assets were previously managed by a division of Alberta Treasury Board and Finance.

ABOUT THE HEALTHCARE OF ONTARIO PENSION PLAN

Created in 1960, HOOPP is the pension plan of choice for Ontario’s hospital and community-based healthcare sector more than 321,000 members and retired members and 500 employers. With more than $70 billion in assets, HOOPP is one of the largest DB pension plans in Ontario, and in Canada. HOOPP is governed by a Board of Trustees with representation from the Ontario Hospital Association (OHA) and four unions.

For further information or to arrange interviews, please contact:

Summary/Backgrounder on the World Bank Report on the Evolution of the Canadian Pension Model
November 22, 2017